Mounted within a nonthreaded aluminum alloy ring, a Haida Magnetic Filter for the Haida M15 Filter Holder is made specifically to fit between the Haida M15 Filter Holder and a separately available adapter ring for the filter holder. For filters such as a Haida Magnetic Circular Polarizer, the filter holder's external dial integrates with the filter ring, allowing for the independent rotation and adjustment of those filter types.

Pre-installed with one pair of plastic filter slots, the aluminum alloy filter holder is initially configured to accommodate one rectangular filter. Use of the Haida M15 Filter Holder is easily accomplished by placing a separately available Haida M15 Filter Holder Adapter Ring onto a compatible lens, followed by an optional Haida Magnetic Filter for the Haida M15 Filter Holder. After being fitted onto an adapter ring, the filter holder's pull-and-release locking knob helps to provide a reliable, yet adjustable connection that allows the holder to be rotated 360°, which benefits the use of rectangular graduated neutral density or other filters that are enhanced by varied positioning. 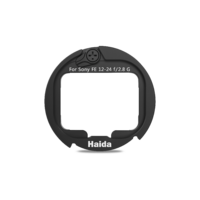 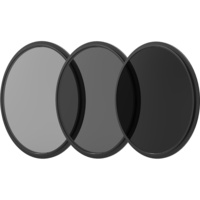